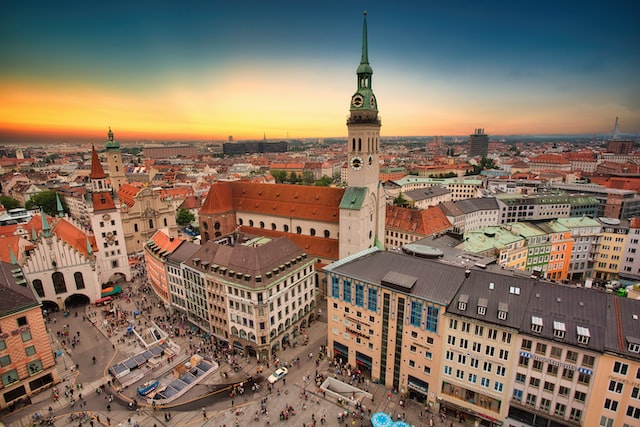 Munich is the capital of Bavaria, famous for its beer and gastronomy around the world. Surrounded by the majestic Alps and picturesque lakes, Munich’s city centre boasts Catholic cathedrals, ancient monuments and palaces that haven’t changed a bit over the centuries. Munich is unlike any other city in Germany – it’s a world apart, living by its own rules and preserving the atmosphere of a medieval city, forgetting that it’s the 21st century. Here’s what’s worth seeing in Munich for the Bavarian culture and how to fall in love with the capital of Bavaria.

Munich’s historic centre is a good place to start. Start at the main square at Karlsplatz and make your way through the historic old town, along Bavarian breweries and the famous cathedrals. To reach the Old Town, you’ll pass through the Gothic Karlstadt Gate. Then Neuhauser Strasse, a pedestrianised street with plenty of shopping opportunities, is a good place to pick up after your sightseeing.

Stop by the Church of the Virgin Mary on the way, famous for its twin towers. There are many mysterious legends about the church, one of which is about the architect’s deal with the devil who left his ‘devilish’ mark on the cathedral’s doorstep.

In the middle of the square look out for another important landmark: the column of the Virgin Mary, the patron saint of Bavaria. And next to the column is the famous Fischbrunnen Fountain. Also worth a visit is the old Toy Museum, with its collection of toys that are several hundred years old.

You can explore all of Munich’s historic old town on one of the sightseeing tours.

If you’ve walked around the Old Town and seen all of Munich’s ancient monuments and cathedrals, it’s time to take a break at one of the Bavarian breweries. Bavarian beer and sausages have long since become a national treasure and their fame has spread far beyond Germany.

You’ll find a few breweries around Munich at every turn, but make sure to visit the most famous ones. The Hofbräuhaus, which dates back to the 17th century as the court brewery of the Bavarian dukes. Be prepared for the fact that the standard beer
standard beer glass holds one litre.

nother no less famous beer hall is Augustiner. Here, along with the beer of the same name, we recommend the legendary Bavarian sausages served with stewed sauerkraut and brezelles.

While you’re in the Old Town, head for the famous Viktualienmarkt. Here you can buy cheeses, sausages, fish and other Bavarian snacks, and have a beer in the cosy beer garden. 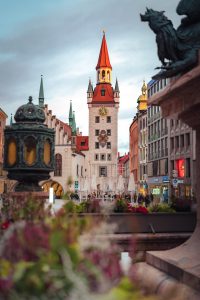 Munich has a wealth of natural areas and picturesque parks, and the Englischer Garten, one of the most important parks in the city, is centrally located. When the weather is nice, head out for a picnic by the rushing Isar River. A must-see is the Surfers’ Corner at Eisbach, where in all seasons one finds extreme surfers who conquer the artificial waves of the icy Eisbach River.

A visit to Theresienwiese in autumn is a must. This place is world-famous for hosting the Oktoberfest beer festival. For a few weeks from mid-September to early October the entire meadow is decked out in rowdy rides and beer tents. And the fun goes on here 24 hours a day.

Take a day out of Munich’s historic city centre and head to the Olympic Park, an area of particular interest. Here you can see some equally interesting sights, which were built for the Summer Olympics in the 1970s. The park is home to the Olympic Tower, which you can climb to view the surrounding Munich and the Alps from a height of 190 metres. Close to the park is the famous BMW Welt factory and museum, showcasing both the company’s modern cars, as well as historic models not found anywhere else.

The mountains and lakes of Bavaria

To be in Munich and not see the scenic mountains and royal castles around is to not see Bavaria. Be sure to set aside a day to see the sights closest to the city. Head to the fairytale castle of Neuschwanstein, which is surrounded by high mountains and clear lakes. It is said that Walt Disney was inspired by Sleeping Beauty Castle and, among other things, Disneyland when he saw this castle.

Near Munich, the small Bavarian towns of Nuremberg and Rothenburg on the Tauber are worth a visit. Their medieval atmosphere is very well preserved and as you stroll along the streets of these fairytale cities you are transported back in time to several hundred years ago. There is also one of the best Christmas markets in Germany during the winter.

Finally, it is advisable not only to admire the Alps from afar, but also to head to the heart of the German Alps – to the town of Garmisch-Partenkirchen. Here you can take the cable car up to the highest point of the Alps in Germany. There’s also a ski resort and snowboard equipment rental shops. If you’re not ready for active sports, you can have a mulled wine in front of the breathtaking panorama of the Alps and go down for a walk in the fairytale town of Garmisch. 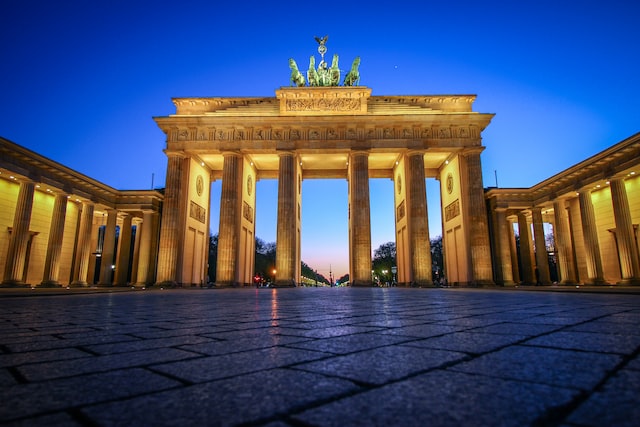 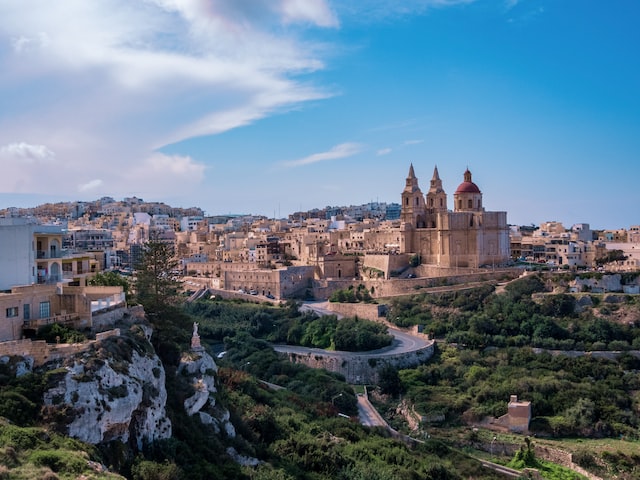 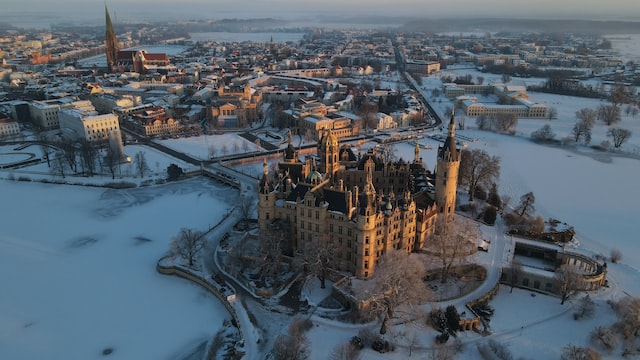